I recently started using Quiver to do my normal note-taking. I had already tried a whole gamut of other apps including Evernote, Notion, and Boostnote. I never really got comfortable using Evernote, to be honest. It never went beyond scribbling a note here, a thought there.

I used Notion for a while and I tried to make it work for me. However, the biggest downside was that the Mac and iPhone app just didn't feel that snappy. It just felt that it was a few milliseconds too slow. To be fair, I was expecting it to boot at the speed of the native Notes app in Mac or iPhone which is not a reasonable comparision. Notion is amazing and provides a groundbreaking approach to taking notes. Furthermore, with the upcoming API support, it could even act as a Headless CMS for this blog. Alas, I couldn't wait that long.

Boostnote came very close. I liked Boostnote 1.0 because it had great Vim key binding support. However, with Boostnote 2.0 they introduced pouchdb as the main data store. Previously, the filesystem was being used to store the files. They have good reasons for switching as explained in this issue:

We've learned using the file system is quite dangerous while maintaining the current Boostnote project. Most of the problems are caused by the differences between OSs.

However, I share the sentiment of one commenter in that I preferred files being saved transparently to the filesystem where I can sync them to Dropbox/Google Drive. Boostnote 2.0 provides a cloud syncing functionality but I much rather use iCloud.

In the search to get another editor that would fulfill my requirements, I stumbled across Quiver. It sounded very promising as it markets itself as The Programmer's Notebook. Turns out it was a perfect fit me. Firstly, it feels very snappy as an app. It has decent Vim key binding support. It saves files directly to the filesystem using its data format. This allows me to sync using iCloud / Dropbox. Furthermore, there are tons of export scripts available in addition to the great native export options. Plus the format is very reasonable to work with so if necessary I can always wire up a custom export script. And it seems like at least one other person agrees with me:

Finally, because it is a Mac-only app it doesn't need to worry about the cross-filesystem syncing issues Boostnote had to manage.

There are some cons with Quiver. It is a little more complex than I need. For example, it has 5 different cells:

I only use the markdown block (I tend to put my code samples in the markdown block) so I don't need all the other blocks. Thankfully, Quiver has the option to set the default cell type which I quickly set as Markdown. Though I do plan to explore the Diagram cell further in the future.

Furthermore, there is some cool theming support. After trying a few custom ones I settled on the official spacegray theme. Doesn't this interface look beautiful: 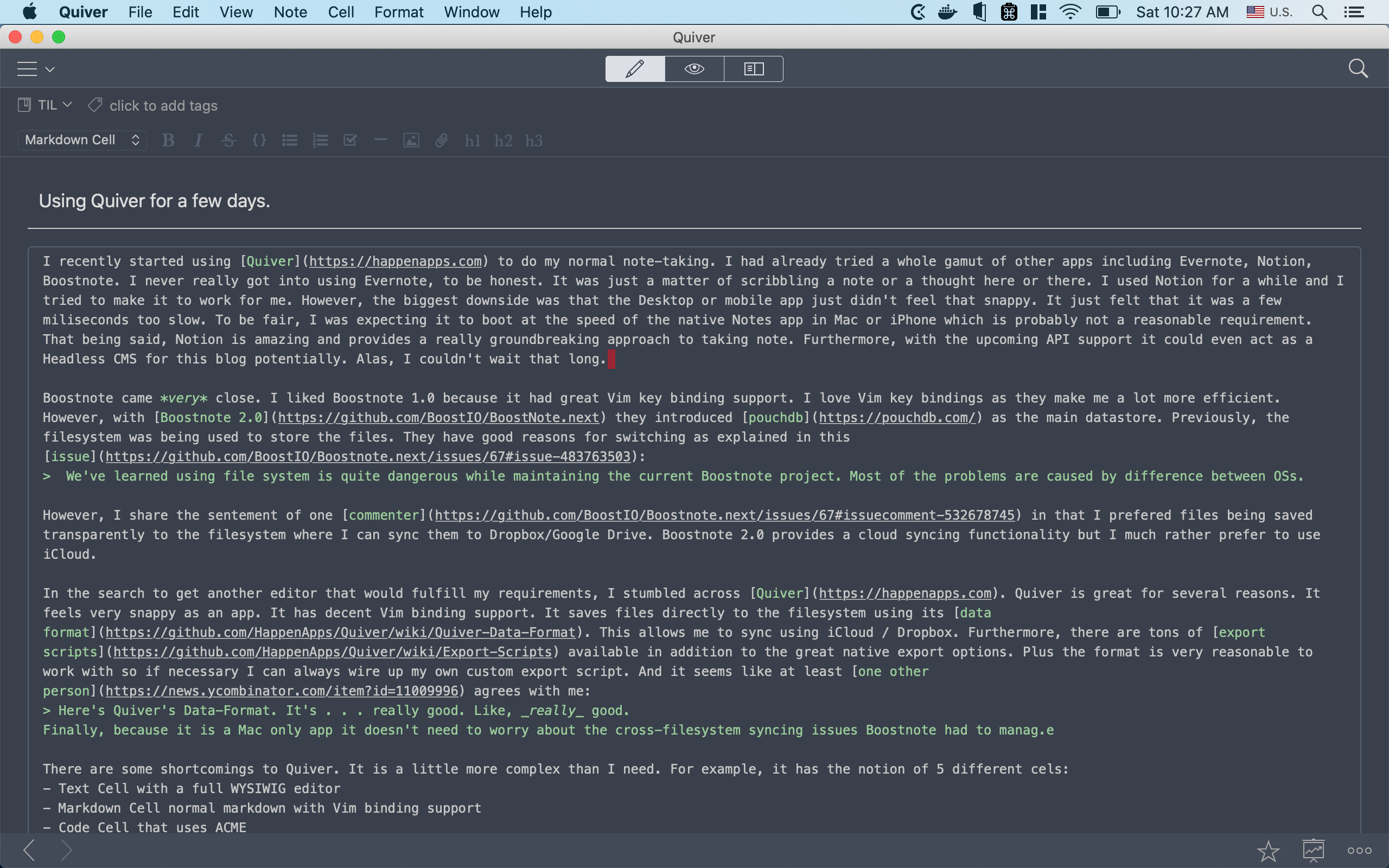 Yup. I am a fan. Thank you for reading.